Our mission is to open the doors of cartographic possibility to anyone interested by creating a time and space for collaborative learning, exploration, and map creation using mapping tools and technologies.

2015 Maptime Summit - So Many Things and So Many Thanks!

###A great big (belated) THANK YOU! to everyone who came to the 2015 Maptime Summit! 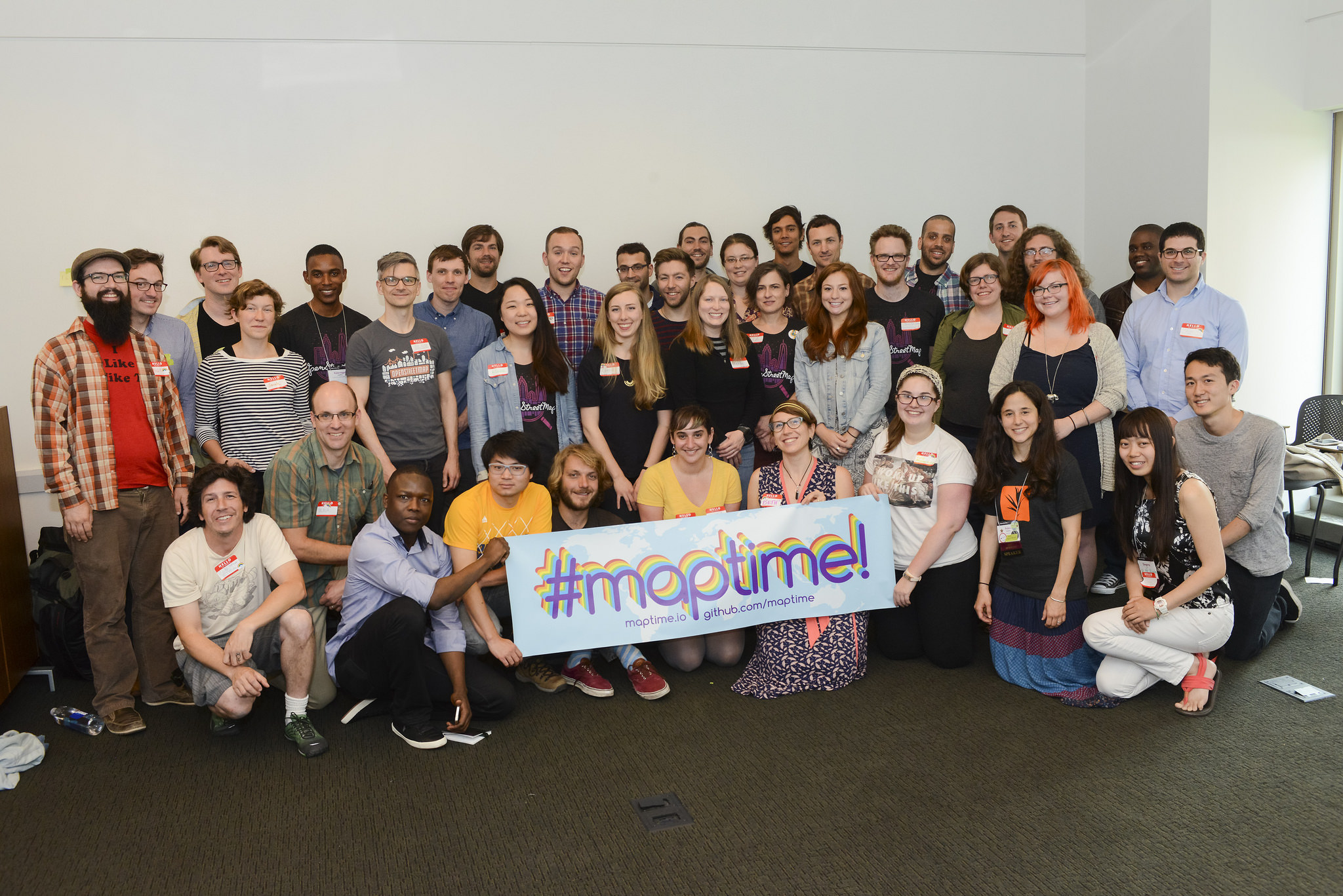 Those are the only words I can use to describe the feelings after the Maptime Summit. Many thanks to everyone who made it out! We had representation from Amsterdam, Berlin, Madison, Vancouver, New York City, Boston, Lexington, Washington DC, New Orleans, Philadelphia, Bend, Cleveland, and Portland, as well as people interested in starting up in Taipei, Beijing, and Trento. To think that last year we were blown away by the 9 chapters who showed interest…we’ve gotten nearly six times bigger!

With this growth in mind, this year’s Summit took a bit of a different shape than last year’s. It’s not just about the excitement of getting people on board for learning. While that’s still the case, these days we’re all – and I mean HQ as well as chapter organizers, particularly the ones that have been going for a year or more – thinking about how to sustain ourselves. How do we deal with burnout? How do we deal with paying for spaces and snacks? How do we keep this wonderful rainbow aglow?

In the opening remarks, we talked about some important changes that will hopefully help with that. First, Lyzi will be stepping up as Executive Director, and while I’m stepping sideways and back into a role as President of the Board (we’ll talk more about organizational stuff in not-so-distant future blog post). The other important change is: it’s time to ask for dollars, even from attendees. The idea is not to turn Maptime into a commercial enterprise. However, it’s a lot to ask an organizer to pay for a space on top of everything else, particularly if they can’t find a sponsor. It’s much less of an ask to request a $5-10 donation from attendees. Even if someone has to pay a small amount at every Maptime, they are still only looking at $60-120/year, which is pretty competitive for geo education (especially in the US). Again, look for more blog posts about these operational topics in the not-so-distant future. 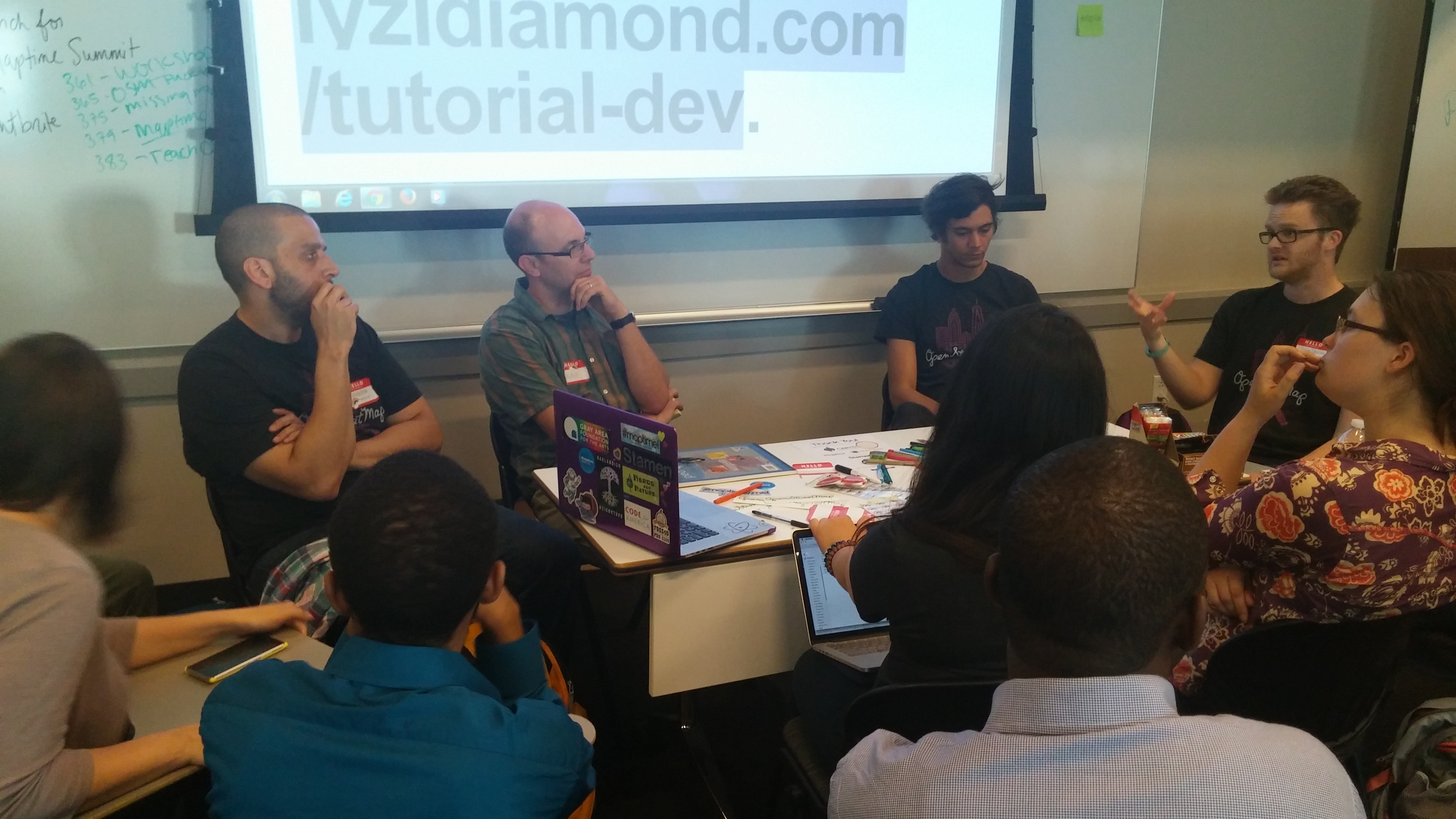 We got these announcements out of the way early because our main goal for the event was to give the chapters space to collaborate, get to know each other, to think about these questions and work on answers. People gave lightning talks on what’s working (and what’s not) at their chapters. Later during the Unconference sessions, people got into groups and talked about everything from Maptime for Kids, to more specific identification of barriers to entry in Geo, to onboarding, to what an Intro to Cartography tutorial would be.

That last idea (which already has a repo for anyone who wants to contribute) sprouted from Lyzi’s Intro to Maptime Tutorial. This topic yielded (as usual!) LOTS of great ideas for Maptime tutorials: Geocoding, Routing, Cultural Mapping, OSM Data Extracts, Documentation for JS Libraries, Turf.js, Basic Javascript, Field Papers, and more. We can’t wait to see what you make!!

Finally Alan and Camille ran a how-to on Github for Maptime Organizers, where they explained the Github workflow in a really simple way. Like, really really. I encourage everyone to watch it here, starting at about 1:28 (that’s hours and minutes). It’s perfect for anyone who is curious about how Maptime uses Github, and how we should be thinking about using it in the future.

“Every time I looked over at you, you just had this big smile on your face,” said Brandon Knight of MaptimeDC at the SoTMUS closing party at Mapzen. I’m not surprised - The day was a really joyful one, one that represented years of work and love from hundreds of people. Even though I was exhausted, how could I not deliriously smile?

Now I’m getting settled in my new home in Portland, still smiling, though a bit less deliriously. I’m excited what comes next for Maptime, not to mention incredibly grateful for the past couple of years and for an amazing Summit. Many thanks, again, to everyone who made it out; to the State of the Map US team; to our patrons CartoDB (year of pizza, what what!), Mapbox, and Mapzen; and to our founding partner, Stamen Design.

We did it together! Here’s to a future of more collaboration, and many congrats to Lyzi as she steps into her new role!

Want to see (almost) everything we did at the 2015 Maptime Summit? Take a look at these videos on Maptime’s Youtube channel, and keep an eye out for a post from Katie Kowalsky (MaptimeMadison) coming up in xyHt!

Oh! And if you want to get involved with HQ we could definitely use your support. Take a look at some of the tasks we need help with on the Maptime Admin Wiki and email hello[at]maptime[dot]io for more information.